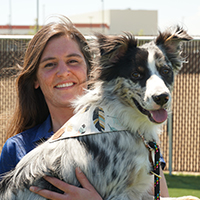 Sarah was raised in a home with parents who are Professional Dog Trainers. She is unique in the dog training world as a 4th generation dog handler. Her father, grandfather, and great grandfather were all dog trainers. She now trains alongside her younger sister Britta.

Sarah is the proud dog mom of her 14 year old Australian Cattle Dog Junior. She credits this 45 pounds of Dynamite for keeping her training skills sharpened on a daily basis. Junior was bred to move cattle and protect farms, resulting in subsequent aggressive tendencies. Overcoming challenges with Junior has blessed her with a mastery of aggressive behavior modification.

Sarah’s second dog Kitti has familiarized her with the opposite end of the spectrum. Kitty is a fully trained 4.2 pound Rat Terrier with an eagerness to perform and learn more. Many people are under the impression that small dogs have a low trainability. Kitti and Sarah enjoy showing others that anything is possible with time, consistency, and dedication. 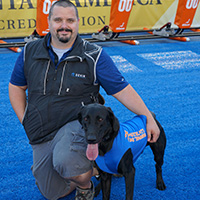 Devin was born and raised in Boise, Idaho. He has been with Positive Pets since 2012, but came into the world of dog training a little differently than most trainers. Devin graduated from Boise State University in 2012 with degrees in International Business and Marketing. He spent some time studying abroad, and eventually came back to Idaho to start a career. His girlfriend (now wife) was working for Positive Pets, and Devin was so impressed with how well-behaved her dog was, that when it came time to train his own dog, he knew how he wanted it done! After having so much fun training his own dog with the Positive Pets Program, Devin decided he wanted to make it a career. He walked away from a high-end corporate job to do what he loves: train dogs and help people. Devin has an American Field Labrador named Kali, one of Kali and Kohl’s puppy’s Dover, and his wife’s Red Heeler Zazu. 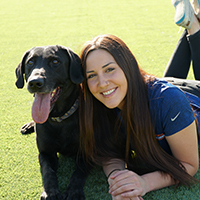 Britta Closson was raised in a home with parents who were Professional Dog Trainers. She is unique in the dog training world as she is a 4th generation Dog Handler. Her father, grandfather, and great grandfather were all true “dog men”.

“While most children learn how to stand by pulling themselves up on the sofa or coffee table, my parents have a video of me learning how to stand by holding onto one my dad’s Labradors. Growing up with a father who is an active competitor in training as well as a mentor to hundreds of trainers all over the world has its advantages.”

Britta maintains her education and cutting edge techniques by attending several yearly seminars put on by industry leading specialists in the field of Canine Behavior and Training. She lives in Meridian with Kohl, the Official Bat Dog for the Boise Hawks as well as the Tee Dog for Boise State. Her other fur babies include her Sharpe mix Sarah, and her German Shepherd Otto. 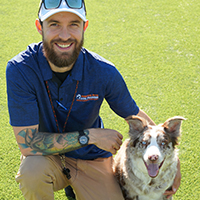 Donny has been a trainer with Positive Pets Dog Training since 2014. Within his early involvement with the company, he started caring for the wellness needs of the dogs housed at the training facilities. As he became more and more passionate about dog behavior and obedience training, he began training alongside other advanced trainers in the company.

His experience with training is exceptional in the beginning and advanced concepts of various fields of study. Some of these include obedience training, gun dog training for both retrieving and pointing breeds, tricks (including performing at nationally televised events), and therapy/service dog training.

For Donny, work is more than training a pet dog to follow commands. It is the building of a relationship between a canine and its owner. Unleashing a dogs true character and potential helps Donny create training partnerships between humans and canines that are built to last. His four-legged companions are Skye the spunky Australian Shepherd and K.J. a black lab, junior to Kohl the BSU Tee Dog! 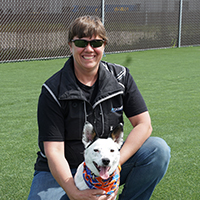 Tasmyn moved to the US in 1992 from her hometown of Durban South Africa. After completing high school, she followed her passion for teaching. She and her dog Miela have enjoyed traveling and exploring this beautiful country that we live in.

Tas and her 2 dogs Miela (13-year-old Staffi, Rotti, long hair Dachshund mix) and Maple (18 month old blue(white) Heeler) moved to Boise last year. She was looking for a place to train Maple to be an off-leash Mountain Bike, hiking and general all around outdoor girl-she found Positive Pets whose training program lined up perfectly with what she wanted. Tas and Maple were welcomed to the Positive Pets family as clients but Tas also started her new career path towards becoming a dog trainer. She started working as a kennel tech and loved the “hands on” approach to learning and furthering her knowledge about the dog world which she had always loved.

Tas’ dedication and fun loving attitude are present in all that she does, her love for teaching, helping and challenging her clients (both human and dog) to be the best that they can be. Miela spends her days relaxing at home enjoying her retirement and taking any opportunity to nap in the sun. Maple and Tas continue to work every day on their skills to be positive role models in the community and enjoy life to its fullest. 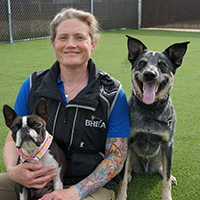 Brea began training and competing with her dogs in 2011 during her 20-year career with the Marine Corps. While stationed in Cherry Point, NC, she earned CGCs with her two Boston Terriers, Stitch and Jolie. She completed formal Therapy Dog Training at Sound Dog Training Center in Morehead City, NC. Following training at Sound Dog, Brea completed required training with the Coastal Carolina Chapter of Love on A Leash with each dog, earning each Boston a therapy dog certification. Stitch and Jolie went on to share the gift of their love throughout many visits with residents of local nursing and rehabilitation centers.

In addition to therapy dog work, Brea began training for agility trials with Stitch. The two began competing together in 2012 and earned AKC Novice Titles in Agility and Agility Jumper.

Upon retirement from the Marine Corps, Brea relocated to Boise, Idaho. She attended Basic Obedience with her newly adopted Australian Cattle Dog puppy, Sprocket. After a week of class, she decided she had found her home in dog training and began her career with Positive Pets in 2018. Since then, she and Sprocket have completed the Super Dog Private Course of Instruction, Basic Obedience, and Tricks. Sprocket is currently training for upcoming herding trials. Brea also found her newest little love, Bindi, a Boston Terrier, while with Positive Pets. Bindi earned her CGC in March 2019 and is currently training to compete in agility. 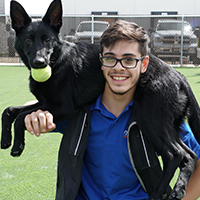 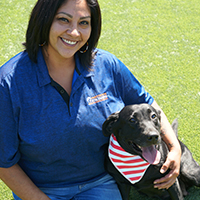